After the rain in Kiev paralyzed the movement on the “left Bank”: passers-by were photographed, the machine was lost in the water room 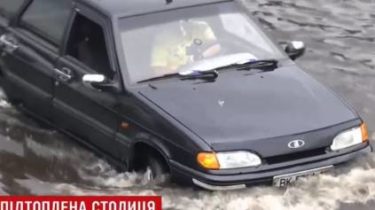 After the rain in Kiev paralyzed the movement on the “left Bank”: passers-by were photographed, the machine was lost in the water room

The utility explained why he formed such a huge puddle.

A real tropical downpour for a few hours covered the capital, some streets turned into canals with considerable depth. Pedestrians had to overcome the river Ford, barefoot, and motorists waited or forced tubes, it’ll do for water, or risked their own cars, according to a story TSN.19:30.

The car was going, and practically floated down the streets of the capital Yevgeny sverstyuk, where the interchange near the metro station “left Bank”. A little over a year ago, before “the Eurovision” it was opened after a major overhaul. The cars, the water flooded the hood, the trucks from under the water was not visible wheels. The sidewalks are completely flooded, but the teenagers they took pictures and laughed.

Videomania downpour turned the streets of the capital on the river

A real tropical downpour today for a few hours covered the capital, turning the city streets into canals with considerable depth. Pedestrians had to overcome the river Ford, barefoot. Motorists or waited until come water, forced traffic jams, or dam the river, risking their own cars. 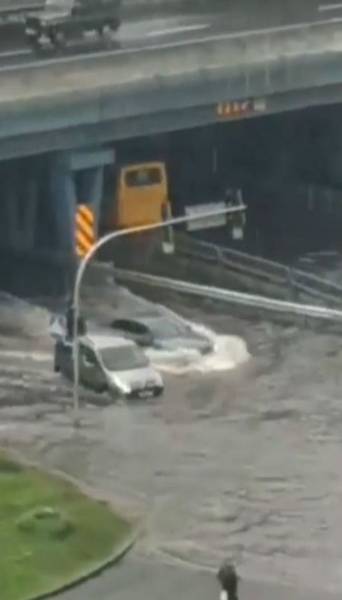 Elderly people remove their shoes and overcome pedestrian crossing knee-deep in water. Even those who managed to escape from the flood in the bus, water comes out of it. Half an hour after the start of the shower flow of traffic stops. Near huge puddles appear and the utility to release water. To do this, they open the manholes of stormwater drainage. Worker Nicholas explains the reasons for the flood: “So planned. So much water that it could not go immediately all out.”

After the strong downpour Kiev turned into a solid puddle: people can go, drowning cars

The water near the “left Bank” are gone for hours. Next waited nervously for drivers who are lost in the water licence plates of their cars. “It’s not ours, there is not ours! A lot of them outrivals! Very much!”, – says Victor. Similar car owners have accumulated a dozen. Their property they finally found, though not always in perfect condition – someone lost the pieces of metal has already managed to ride.

A powerful downpour in the capital: cars floating on the flooded streets (4 photos)