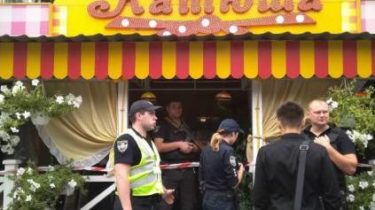 In the center of Kiev in Lesi Ukrainki Boulevard, the shooting occurred in the restaurant “Katyusha”.

As noted, the shots were heard on the veranda of the institution about 11:00.

Pre-installed, walked into the restaurant company of three men, one of them opened fire from Makarov pistol and then threw it on the floor, and all the participants of the incident escaped.

In turn, the leadership and staff of the institution declined to comment, and visitors to the restaurant have confirmed that they heard the shots.

According to preliminary information, the victims of the shooting there.

Now on the scene are the police and investigatory-operative group, conducted investigations, the attackers wanted.

Shooting in Varenichnaya “Katyusha” on the Boulevard of Lesya Ukrainka

We will remind, earlier on Obolonska waterfront in one of the restaurants, the restaurant’s owner opened fire on the visitors, as a result, one person was killed and another was injured. Subsequently, the man confessed to the crime.