Experts compared the cost of borsch in Ukraine and abroad 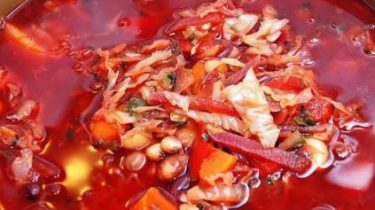 Experts compared the cost of borsch in Ukraine and abroad

The most expensive to cook a traditional Ukrainian meal will be in France.

Experts estimated the cost of all ingredients on the pan in three and a half liters.

The cheapest soup you can cook in Slovakia – 41 torque and 134 of the hryvnia with meat. Next is Poland – 44 and 142 hryvnias respectively. In the Czech Republic cook the soup will be more expensive: meat it will cost 187 USD.

The most delicious Ukrainian borsch

But pay for the preparation of the Ukrainians. In Ukraine favorite dish will cost 103 rate of 29 meat and without meat.

By the way, the soup is liked not only by Ukrainians, this dish is revered throughout the world. Authoritative British newspaper the Guardian said the Ukrainian borsch is one of the best and most delicious festive food in the world.

We will remind, earlier in Ukraine due to bad weather increased the price of borscheva set. Due to daily rains, the majority of vegetable crops just rot in the fields and orchards.