Genocide against the Ukrainians. In Bykovnya honored the memory of victims of Communist terror 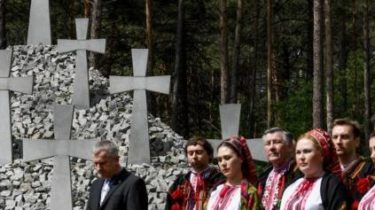 Genocide against the Ukrainians. In Bykovnya honored the memory of victims of Communist terror

The Communists condemned to the repression for almost 200 thousand Ukrainians.

In Kiev honored memory of victims of the Great terror of 1937-1938 during the Communist regime.

As reported in the story TSN.19:30, for the dead served a memorial Liturgy. A memorial event was held at the place of execution of victims of Stalin’s regime in Kiev, and also in the reserve Bykivnia graves where the dead were brought. During massive repressions in Ukraine was condemned by almost 200 thousand people, most of whom were executed.

The great terror began with a Directive from Moscow: “I Order you: 5 Aug 37 all the republics, territories and regions to begin the operation of repression of former kulaks, active anti-Soviet elements and criminals”.

In Russia, on secret orders to destroy information about repressed during the Soviet era

Essentially it was a genocide. In Ukraine began to destroy intellectuals, scientists, clergy, peasants and workers.

“He was conceived by Stalin for the destruction of those who could resist his personal power, his totalitarian regime, which he established in the USSR”, – said Georgiy Lukyanchuk, Chairman of the international public Association “Solovki brotherhood.”

August 5 order has begun.”Each Republic, region, district down the limits on repression for the first and second categories. At the first shot, the second – imprisonment”, – said the dissident Vasyl Ovsiyenko.

These limits also include in the document. Not names, but just plan on killing. In 1937 in Ukraine killed more than 26 thousand people. In the next year to punish to the death and claimed more than 80 thousand. The so-called courts of three-happened instantly. Today the arrest and tomorrow is shot. The body was smuggled.

“This was done under cover of night. In may 1938, was brought here more than 500 people. The Bykivnia graves memorial, one of the largest in Ukraine. Buried there more than 30 thousand victims. Their fate has opened the archives,” said Bogdan Bilyashivsky, CEO of the national historical and memorial preserve “bykivnya graves.”

Great-granddaughter of the repressed Valentine Nesenenko reported that her relative was shot over two horses, which he did not want to give away the farm. “Born in White Church, the master-gunner, who was to blame for the fact that he wanted to work on himself,” said the woman.

On the tree there is a plaque with his name. In the Bykivnia woods shot a lot of photos. Relatives found where they are buried. And the most part of repressed Ukrainians have not yet identified.