In Moscow on the Crimean bridge, hung a banner in support of Sentsov 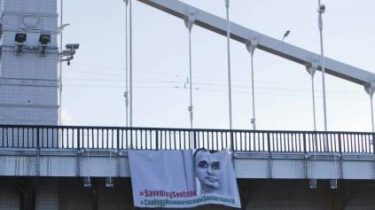 In Moscow on the Crimean bridge, hung a banner in support of Sentsov

Ukrainian prisoner of the Kremlin on hunger strike for 87 days.

In Moscow on the Crimean bridge the unknown hung a banner in support of the Ukrainian political prisoner, Director Oleg Sentsovwho has been illegally held in Russia.

This was announced on his page on Facebook Victoria Ivleva.

“Sentsov. Eighty-seventh. Early this morning, on the Crimean bridge in Moscow appeared here a banner. And do not think that in Russia there are no available, caring and conscientious people,” she said.

Ivlev also urged to sign a petition about the exchange of prisoners of Russia and Ukraine.

SENTSOV. EIGHTY-SEVENTH early this morning on the Crimean bridge in Moscow appeared here a banner. And do not think,…

On may 28, the Federal service of execution of punishments stated that Sentsov has agreed to supportive therapy.

The Ombudsman Lyudmila Denisova for five days trying to meet Sentsov, however, she refused to even video.

Videoroliki critic staged in Moscow picket in support of Sentsov

Alexei Medvedev on the eve of wrote in the social network that holding a peaceful rally court denied. Therefore, he urged everyone who wants Oleg lived, come to the monument to Alexander Griboyedov and put water in the flowers. The action in support of illegally barred the Ukrainian filmmaker was joined by fifty people, who brought fresh flowers. 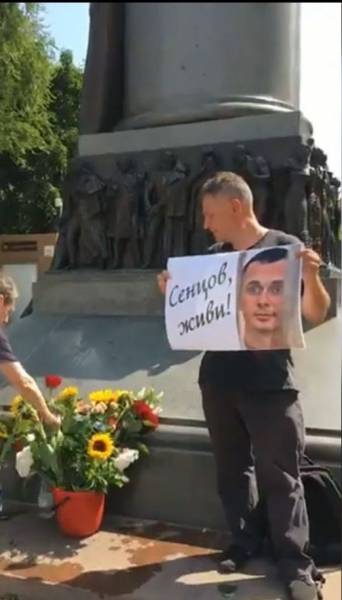 Dinze previously reported that Oleg Sentsov has considerably worsened the condition. According to the lawyer, he strongly decreased hemoglobin, leading to anemia and a very low heart rate near 40 beats per minute. Oleg bad heart, and twice tried to persuade to go to the hospital. However, the hunger strike he isn’t going to stop.