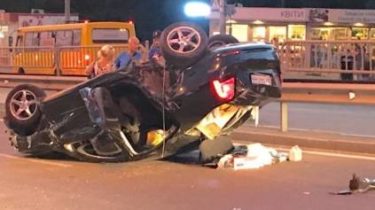 Police seek gray-haired man and asks for this help.

A terrible accident that claimed many lives and wrecked several cars, happened on the eve in Kiev because of the man who ran across the road in an inappropriate place. From the accident scene to the underpass was some 20 meters, says the story TSN.19:30.

“Man, 50 years old, gray-haired man” – talking about the pedestrian witnesses of the accident. The scene of the tragedy, the pedestrian ran away. The police requests the assistance of all witnesses and drivers, loggers which could get this person. “The investigation proceedings under article about infringement of traffic safety, entailed death of the person. It provides imprisonment up to eight years”, – said the representative of law enforcement bodies.

Video settings Kiev, the pedestrian was the cause of a fatal accident, when ran across the track

From the accident scene to the underground passage of some 20 meters, but the man decided to cross straight. The driver of “Skoda” in order to avoid a collision swerved to the curb where he was parked a few cars. One of them was the driver, put the baby in the car seat. The man died in the carriage of an emergency, but the pedestrian, who was the cause of the accident, just fled. 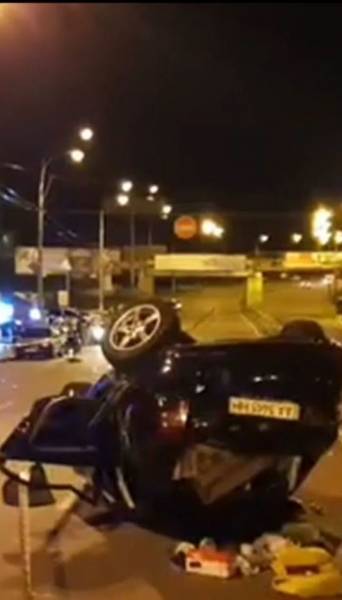 Such accidents, according to the cops not unusual – only last year they recorded almost 1,300 cases when the pedestrian ran into the road, was on the roadway drunk, and most often for such offences is paying for their own life or health. By law, if a pedestrian was involved in an accident, he must help the victims, to record witness information and report to the police. If there were no victims to pay a symbolic fine of less than 100 UAH. But if he was the cause of the accident, you should pay the victims for material and moral compensation as well as to bear criminal responsibility.

Became known the details of the accident in Kyiv region, after which the unconscious lies in the intensive care unit of an unidentified girl

As reported yesterday in Kiev, near the metro station “Syrets” happened a terrible accident involving four cars. Eyewitnesses said that the driver of the Skoda was travelling at high speed. At this time the road in an unspecified place ran a pedestrian. To avoid hitting him, the driver started to maneuver but lost control of the car and drove into three parked cars: first Hyundai, then in Dacia Logan and Actyon. After that, Skoda has rolled onto the roof. At the moment of collision the driver of the Hyundai with the Sumy rooms were put in the car in the car seat of his 3-year-old child. A man and his car took the brunt of the explosion, with severe injuries the victim died in the carriage “first aid”.