The animal lost his sight and constantly has a high temperature.

One of the most famous raccoons Ukraine – Marley – and its owner was attacked by unknown. The guy was cut with a knife, and the raccoon struggled kicked in the head. A few vet clinics, which appealed to the owner to treat the animal refused, they say, have not had to deal with raccoons. This is stated in the story TSN.19.30.

A two-year raccoon Marley reluctantly gets out of his cage, and recognize us on the scent – some days almost not seeing anything. Now life Marley is under threat. The owner of the animal Dmitry Reshetnik said – came back home through the Park as he was accosted by two guys-teenagers.

One of the most famous raccoon of Ukraine and its owner was attacked by unknown. Boyfriend cut with a knife, raccoon, struggling kicked in the head. The animal is not oriented in space, and constantly has a high temperature. However, a few vet clinics to treat the animal refused, they say, have not dealt with a raccoon. TSN, Marley and his owner today went for help. 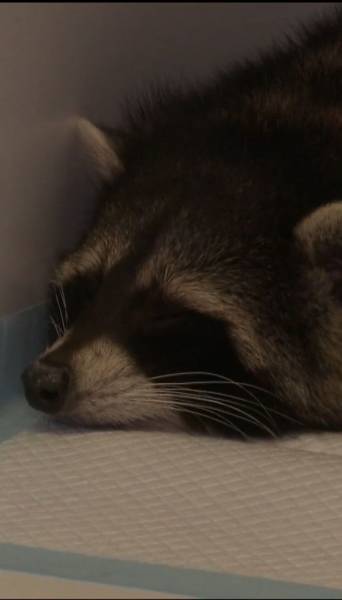 “It was two young men with music, column. They came to me. After a couple of meters, one of them hit me from behind in the leg. I povorachivat, the other pulls out a box cutter. The raccoon was trussed up on the leash as usual,” he says.

When Dmitry started to shy away from a knife, one of the strangers attacked the animal. “I’m the raccoon started to pull and he with all the dope hit in the side of the teeth,” he says.

Marley grabbed the foot of his master. The attackers stabbed Dmitri in the face, and ran away. Police to detain offenders failed. With a split lip victim was admitted to the hospital and after surgery, go home. The raccoon that evening was not bad.

In the US, the Network exploded due to a raccoon that climbed up a city skyscraper

However, on the morning the animal had lost his orientation in space and beginning to lose vision. Dmitry rushed to ring round vets, Internet fans Marley raised money.

“Call, they say that it is bad, it heats up. “No, we’re just cats and dogs”. Two days collected more than 30 thousand hryvnias. Is money the main thing – to find a doctor,” – says Dmitry.

Go to the hospital, where he agreed to examine the raccoon. Only to go out and sit in the car, the animal again becomes bad – fever. The doctors take over. Marley tries to escape when he realizes that there is no chance – clings to master and sustain. In the end, the vets do a cardiogram – heart-of-a raccoon all right.

On head MRI raccoon delivered after lunch – without the owner, the animal is less worried. The results of the study must already be morning.