In Ukraine since Russia moved a convoy of vehicles – OSCE 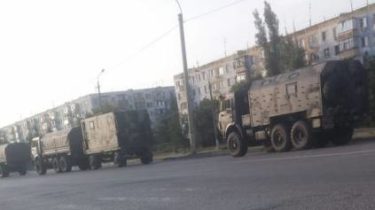 In Ukraine since Russia moved a convoy of vehicles – OSCE

Another convoy left the Ukrainian territory.

In Ukraine through the uncontrolled border with the Russian Federation entered a convoy.

This is stated in the report of Special monitoring mission of OSCE in Ukraine as of 8 August.

Column was recorded by the drone of the SMM range. She moved to the occupied territory of Donetsk region on the night of 7 August, on a dirt road in an area where there are no border-crossing facilities.

At the head of this column was a SUV “UAZ” also in that it consisted of 6 six-wheeled trucks “KAMAZ” with a tarp covered cargo compartments, and one truck with a shelter.

The column went in a westerly direction and stopped on the outskirts of Crystal city, Luhansk oblast (former Red Beam), which is under the occupation of Pro-Russian militants.

At the same time on the same road from Ukraine to the territory of Russia went the other convoy vehicles, which was 8 six-wheeled trucks with covered tarpaulin cargo Bay. The two columns passed each other about five minutes after the convoy from Russia entered Ukraine.

The drone of the OSCE also observed that each of the columns separately, stayed for about three minutes next to some SUV in the field, and then stayed near the two trucks at the intersection of dirt and paved roads.