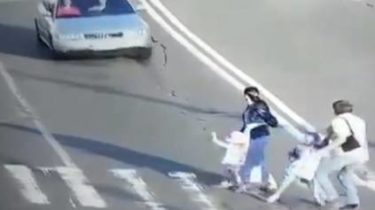 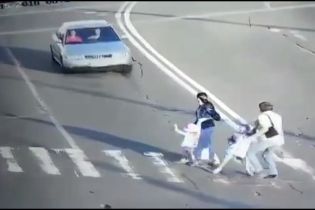 The driver was in an alcohol intoxication.

The accident occurred on the street Miloslavskaya around 7 am. Male with open fracture of the leg is in the hospital. His wife and children were not injured, but are in a state of shock.

A large-scale accident in Kiev: the Zabolotny in a double car accident seven cars, injured baby

After arrival the driver of the Audi car from the scene disappeared. Police found the Audi abandoned on the tram tracks on the street of zakrevskogo, and soon detained the driver, who was intoxicated.

Video of the accident: Double drunk(?) Of road accident victims in Kiev on troyeschina. According to witnesses, the driver of car #Audi KHT 297 first street Miloslavskaya knocked down a family on the move, And then on zakrevskogo took off on the tram tracks. The driver and passenger gathered their belongings and fled in an unknown direction. Previously, the driver was in a condition of strong alcoholic intoxication. The tram traffic was paralyzed. The victim was assisted by paramedics, and urgently hospitalized in BSMP SW. the driver, don’t drink & drive! You can not only deprive yourself of life, but also other road users. Photo: Konstantin, Nikolai, Troyeshchyna FB Send Your photo/video 0937713333 Viber/Telegram #accident #Kiev #accident #photo #today #chronicle #dtp #dtpkiev #dtpkievua #accident #kiev #tpkav

The driver was detained and reported the suspected under article “violation of traffic rules that caused the victim serious bodily injury.” Preparing the petition for election of a suspect measure of restraint in form of detention.