Poroshenko conveyed a personal message to President of Turkey 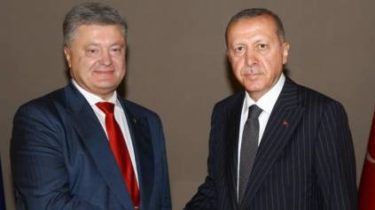 Poroshenko conveyed a personal message to President of Turkey

The theme of the presidential letter is unknown.

This was announced on his page in Facebook the people’s Deputy, the head of the Mejlis of the Crimean Tatar people Refat Chubarov.

August 18, 2018 in Ankara was held the VI Congress of the ruling Party of justice and development of Turkey (Adalet ve Kalkınma…

While details regarding the content of the message is unknown.

Note, during the Congress of the party of justice and development of Turkey, founded by Recep Tayyip Erdogan, the Turkish President was re-elected as its Chairman.

Earlier, amid the diplomatic dispute between Ankara and Washington, Turkish President Recep Tayyip Erdogan said that the US is waging an economic war against his country. Therefore, Turkey is preparing to move to settlements in national currencies with their major trading partners such as China, Russia, Iran and Ukraine.