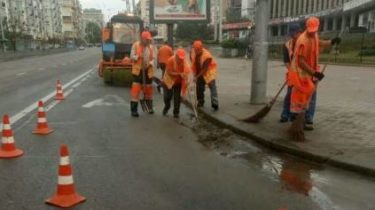 The works were drawn almost two hundred public utilities and nearly a hundred pieces of equipment.

In Kiev on Sunday at the elimination of consequences of bad weather out of 178 workers “kievavtodor” and 91, the machinery unit of the company. This was stated by the head of the municipal enterprises Alexander Thickened.

“Unfortunately, intense rain, hail and squally wind was washed away soil, sand, and a large amount of debris from the trading floors, resulted in the flooding of some sections of the road network, particularly on streets the Esplanade, swimming pool, Antonovich”, – he stated. According to the head of the company, travel the most problematic streets were restored by 6:00 a.m., then the utility went on to work on the sidewalks.

The most complex Thickened called the situation on the street Antonovich, owing to the bad weather destroyed part of the carriageway. “Antonovich commissioned “Kievteploenergo” work is underway on the laying of heat networks. According to preliminary findings, in connection with the carrying out of works in violation of the technology, during intense rainfall the night of 18 to 19 August, there was a significant release of soil masses under the roadway. And this led to the clogging dazdarian wells and greatly increased surface runoff on the road. A considerable mass of rainwater through open ditches went into the roadway. The result was the destruction of the structural layers of the roadway in the area from vul. Physical to Kiev. Now the road workers eliminated the consequences of this situation”, – said the Thickened.

VideoCAM after the flood. In the capital eliminated the effects of a powerful shower

The consequences of high water. Today Kiev comes after a powerful shower – before the water swallowed crossings, a tunnel and damaged the overpass. In the morning, limited movement, forged tube. However, after lunch chrezvychainym and public utilities managed to restore everywhere the movement. 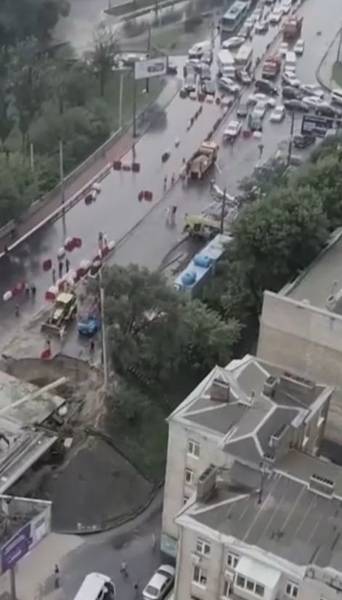