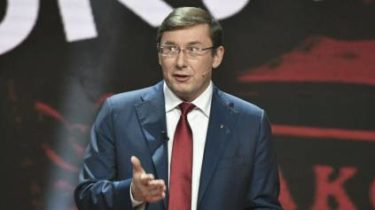 In the opinion of the attorney General, law enforcement officers can be lchshe outside the customs, otherwise it is “new roof”.

Prosecutor General Yury Lutsenko considers that the flourishing of corruption in Ukraine became possible due to three sources: state-owned enterprises, extraction of natural resources, and customs.

He stated this in an interview with “Ukrainian truth”.

“To catch corrupt officials can be infinite, but it is necessary to close the main source of corruption. I see these three main sources. Public sector — 3 500 public enterprises, of which half are non-profit. But it is for the state. For party hosts, who were to have appointed its management, and all carry the Golden eggs. Without privatization, we will never end the systemic corruption,” he said.

According to Lutsenko, the second is natural resources.

“Do you know how many we had open auctions in 14-17 years? 43. It all: sand, clay, oil and gas. That is, of 2213 issued forms only 43 completed the auction. That’s where the roots of the oligarchs that are actually free licenses fill their oligarchic groups”, – assured the head of the GPU.

The third component of the development of corruption in Ukraine Lutsenko called customs.

“Now the customs is proud of the fact that they have tax burden per container increased from 7 to 8 thousand. Just before it was 14 thousand. That is, smuggling is one of the important sources of replenishment, and on the other of corruption. We have plenty of cases on customs. But again, here as in the Prosecutor’s office: no angels, no demons. The government has a lot of questions, but I, as attorney General, these three major issue,” he said.

In addition, the attorney General noted that has a different vision with the Prime Minister Volodymyr Groisman concerning the fight against smuggling, particularly regarding the presence of police in the areas of customs clearance.

“The law on the customs code says that the custom can only be the customs point. On the road, I have two hands “for”, control. But if someone is in there, the law deprives him of any opportunity to do something. This means what? He just symbolizes a new “roof”, it is unacceptable for me. The second position where we don’t agree — I think that smuggling should answer those for her not being paid. It’s customs, they should be responsible for the fact that something is designed right or wrong. If in charge of the SBU, the GPU or MIA, then on cholera us customs?” he said.

However, Lutsenko said that he is not waging war with the government.

We will remind, earlier Groisman complained about the pressure for smuggling. The Prime Minister called on customs officials to work honestly and promised to protect everyone.