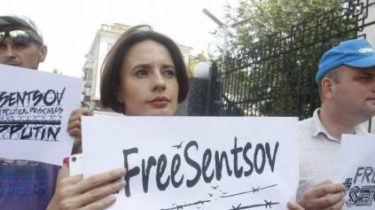 The Director kept prisoner in a Russian prison in isolation.

The hundredth day of the hunger strike of Oleg Sentsov. To support a young Ukrainian filmmaker, who in a Russian prison have refused food for the support of all Ukrainian political prisoners, under Russian embassies today reading letters Sentsov. The beginning of the action of authoritative a writer’s organization “Pen club”.

“Dear Oleg Gennadievich! My name is Nina, How are you feeling and when do you get out?”, “I want to hug you and give a portion of their forces,” – said in a letter to Oleg Sentsov. Read them out loud under the Russian embassies in different cities and countries. To it directly to the correctional facility in Labytnangi, Russian censorship skips a small part of that which comes from all over the world. So today, on the hundredth day of the hunger strike. the letter read publicly.

“We know that Oleg Sentsov is now held in informational isolation. Before it almost reach the letter and, accordingly, do not reach almost no messages from him. This, of course, is done intentionally in order to break it,” says the writer Ostap slivinsky.

Occasionally even come from. the answers to breech the sheets by hand. Each sheet is a complex system of censorship. And it requires skill to speak truthfully – but to get to the destination. Here is what he wrote less as two months ago:

“I feel fine, despite the 51st day (hunger strike – ed.). Of course, not as great as it may seem to some authorized rights, my health – everyone sees what he wants to see.” 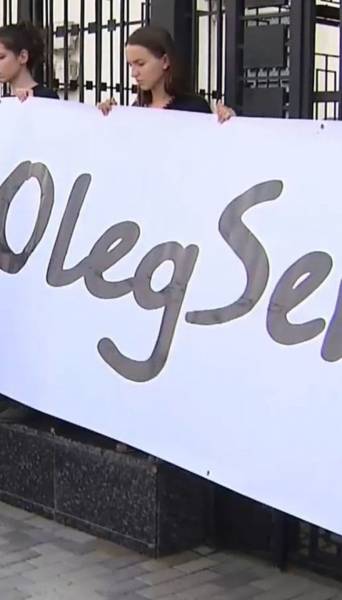 Sister Director Natalie Kaplan says last time I heard something objective about the state of his brother long ago, and photos from Russian authorized Moskalkova, which Sentsov in the colony, as any message from Russia, does not believe too. Sentsov’s lawyer shortly is going back in Labytnangi. Kaplan hopes the joint effort will result. And her brother wait for this moment alive. The only thing she can’t, ask him to make the slightest concession.

“I ask Oleg about it even and I won’t. Although I really wish he came (into the wild). Because I know that it is useless. Just like to ask him to stop the hunger strike,” says Natalie Kaplan.

Russia has denied the information on force-feeding.

The longest in the history of political hunger strike of the leader of the Crimean Tatar people Mustafa Jemilev lasted 303 days, the prisoner was forcibly fed. If He poured the now protein-vitamin mixture – the information varies. Russian Ombudsman says it is. The lawyer denies.

“I think he will stand and win. Because it is such hard-nosed people who live by the power of the spirit, not biological processes in the body.”