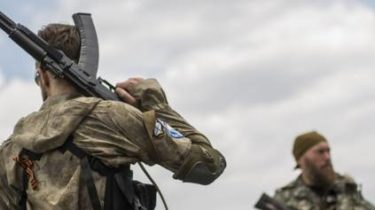 The conflict line is already fully recovered by the Armed forces.

During the attack the Russian occupation troops on positions of the APU in the area of krymske in the Donbas was destroyed eight militants.

This was stated by the President of Ukraine Petro Poroshenko at the opening of the exhibition of modern weapons and military equipment, reports “Interfax”.

“From the report of General Nueva, commander of the Combined forces, which have just been announced: the situation, stability is restored, Ukrainian land is protected, and the people of Ukraine can firmly rely on the Armed forces of Ukraine”, – said Poroshenko.

See also:
Poroshenko for the first time apologized for the promise to end anti-terrorist operation on Donbass for a few hours

He added that he was eliminated eight militants, another 11 were injured. The conflict line is already fully recovered by the Armed forces of Ukraine.

“First the Russians are despicable, breaking a truce, the Minsk agreement, trying to attack the positions of our troops, but (second ed.), our army and our Armed forces are already other”, – the President added.

We will remind, in the morning of 23 August, the militants in the Donbas tried to seize the positions of Ukrainian military in the Crimea on Bakhmutskaya route. The clashes killed four Ukrainian soldiers.