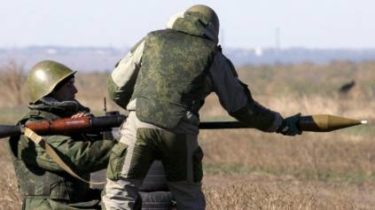 The militants were firing on civilians.

Russian occupants fired at the residential sector in the village Travneve located near Gorlovka.

About it reported in a press-service of the operations of the joint forces.

“26 August 2018 at about 22.30 from the settlement Golmovsky the armed forces of the Russian Federation was carried out the shelling of residential areas of the village Travneve Bakhmut district of the Donetsk region”, – stated in the message.

According to the Ukrainian side of the JCCC, the result of a direct hit mines of calibre of 82 mm to a shed on the street Gaidar, 28, the building was destroyed, but because getting shot PG-7ВЛ the remains of the building caught fire.

As noted, the second mine went near the destroyed buildings and, not ripped, were deep inside the funnel. The scene is shielded and summoned the representatives of the engineering service for clearance.

“The distance between the places of hit of ammunition to the closest positions of the Ukrainian Armed Forces is about 800 m. This is direct evidence of intentional shelling peaceful settlement”, – noted in press service.

Also, the military said that the shelling of the village Kryakivka in the Luhansk region carried out from the village Znamenka armed forces of the Russian Federation.

“On a scene representatives of the JCCC have documented damage to residential and commercial buildings as a result of contact mines of calibre of 120 mm and shells of calibre of 30 mm and 23 mm., the Owner of one of the damaged buildings situated at Gagarin street, 25, male, born in 1952 received a concussion,” – said the Agency.

The Ukrainian side of the JCCC said: armed forces of the Russian Federation is increasingly firing on civilians #of OOS…

We will remind, on Donbass on Sunday, August 26, killing two Ukrainian soldiers.