Good fighters beat from tanks, grenade launchers and machine guns. The situation in the Donbass 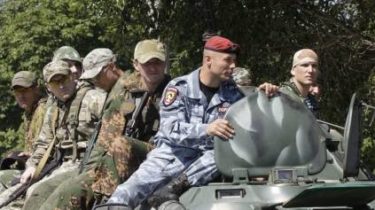 Good fighters beat from tanks, grenade launchers and machine guns. The situation in the Donbass

For Monday, August 27, at the Donbass militants 26 times fired at Ukrainian positions about four cases of the Minsk agreements prohibited weapons. Were wounded two Ukrainian soldiers.

“Russian occupants were aimed fire from mortars of caliber of 120 mm and 82 mm, tanks, grenade launchers, heavy machine guns and small arms. The enemy carried out attacks of positions of the joint forces in areas of settlements the Village Lugansk, Crimean, Zolotoe, Lugansk, Avdeevka, Novomikhaylovka, Krasnogorovka, Gnutovo, Pavlopol, Lebedinskoye, Water and Shirokino. On Lugansk direction near the settlement Crimean, Svetlodarsk – near Luhansk, Mariupol direction – in areas of settlements of Gnutovo and Lebedinskoe the enemy used mortars. Close to Lebedinsky enemy again after a long break, used tanks”, – stated in the summary of the press center of the joint forces.

According to the Ukrainian intelligence, over the past day, 3 militants were killed, 4 more injured.

On Tuesday, from midnight until seven in the morning, the militants six times fired at the Ukrainian positions in the area Novoluganskoe, Gnutovo, Pavlopol and Lebedinsky, using artillery, mortars, grenade launchers and heavy machine guns.

“The situation in the area of operations of the combined forces remained tense, however, completely controlled,” – said the press center.

Recall that the militants used tactics of “scorched earth” against the military in the sea of Azov.