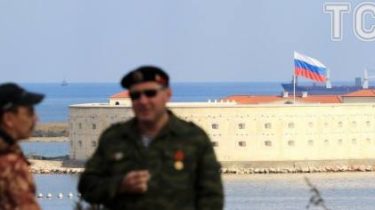 According to the Russian Ombudsman in Ukraine, ignoring the exchange.

Ukraine is in no hurry to exchange detainees in the occupied Crimea fishermen “NMR-0041” on the sailors from the ship “Nord”.

This was stated by the self-appointed Ombudsman for the protection of human rights in Crimea Lyudmila Lubina reported on the website of the Commissioner for human rights in the Russian Federation.

“The captain of the Ukrainian vessel I had visited twice already. No complaints on detention conditions and health, he has not. The only thing that bothers the sailor, is the unknown and the difficult financial situation of his family at home. Crew members also feel satisfactory, have the opportunity to be surveyed in hospitals of Sevastopol”, – she assured.

According to Lubenau, Ukraine ignores the offer to exchange Ukrainian fishermen on the sailors from the “North”.

In addition Lubina stressed that to carry out the procedure of exchange of need as quickly as possible.

“From the moment of detention have repeatedly appealed to the Commissioner for human rights of the Verkhovna Rada of Ukraine Lyudmila Denisova with a proposal to facilitate the exchange. Send her another email and hope to reach the hearts of those who can make the decision and to make Russian and Ukrainian fishermen returned home to their families,” – said Moskalkova.

Now the Ukrainian Commissioner for human rights in Ukraine Lyudmila Denisova has not yet commented on the statement of the Russian colleagues.

We will remind, on may 4, the so-called border of the occupied Crimea detained a Ukrainian ship, because, allegedly, fishermen “illegally extracted flounder in the exclusive economic zone of Russia”. Subsequently, the Russian FSB accused the Ukrainians in the destruction of more than 70 dolphins in the occupied Crimea.

May 12, the border service of the Federal security service of the Russian Federation announced the arrest of two Ukrainian fishermen in the sea of Azov. Russian border guards report that found a boat with two fishermen on Board. They allegedly carried out illegal extraction of fish, particularly of two species of endangered sturgeon Russian”. The fishermen did not have the documents, they, along with the vessel arrived at the port of Yeisk of Krasnodar region of the Russian Federation “for identification and further action”.

Crimean attorney Eden Semelai announced on 25 June that the sailors of the detained off the coast of the Crimea of the Ukrainian vessel “NMR-0041” fast for 10 days. Moreover, due to the fact that they are not allowed to communicate with relatives, the fishermen were on the verge of nervous breakdowns.