A psychologist Kiev has said publicly about domestic violence by her husband. Lutsenko is waiting for statements 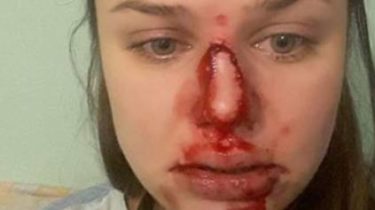 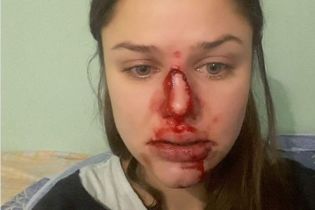 A psychologist Kiev has said publicly about domestic violence by her husband. Lutsenko is waiting for statements

It was supported by hundreds of users, and officials sent the police.

Post-revelation, she has published on his page in Facebook the evening of 28 August, accompanied by a photo of his bloodied face. According to Lily, this is the results of the beatings she suffered in 2016.

“The father of my four children repeatedly hits me. Manipulating the children, threatening to take away and systematically threatens to expel from the apartment where we live. A photo of me in 2016. There is still some evidence. And key witnesses unfortunately children,” wrote Shevtsova.

See also:
A woman’s power in her weakness, it would seem, what does domestic violence

According to her, there were occasions when her husband kicked her in home clothes on the street, took the keys, money and phone. Lily wrote a statement to the police, but, according to her, the husband “blackmailed by the fact that you do not pay a loan that was not paid”.

“It continues with even greater force. I’m looking for support and the opportunity to get out of this hell, my children,” wrote Lily. 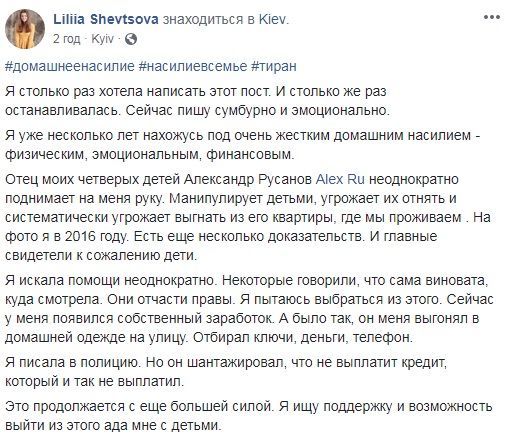 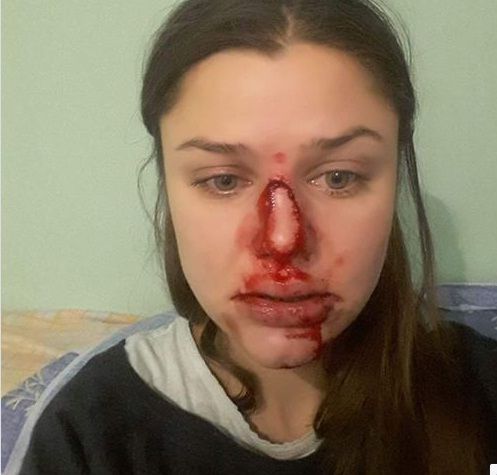 The post women immediately responded with hundreds of users. They offer their help and give advice. In the comments to the post by representatives of the Ministry of internal Affairs and the Ministry of social policy said that was sent home for Lily the police and an interagency group to work on her problem. The General Prosecutor of Ukraine Yury Lutsenko asked to write a statement in his name.

Later, the user wrote in the comments that some of them went to Lily home. Also, the police arrived on a call.

“Lily in the apartment, with several police. Crying. It is unclear what outcome will be. There are five of us, near the apartment, civil. Standing, waiting,” wrote the user Maria Andreeva.

The story of Lilia Shevtsova was another in a series of cases of home violence, which its members have said publicly. The day before Ukrainian journalist Roza toumanova complained that her husband beat her up in front of the kids, and then started to choke. The woman decided to divorce her husband.

TSE steel. Scho I balasa I burgalesa, if saw podne in svom it. Roman panav on me hand I dushev. As sche…

Before that, about domestic violence written Kyiv actor Vyacheslav Koshelev. He bragged about beating his wife and posted a photo with her to Facebook. The victim, Elena Savchenko said that he had applied to the police for attempted murder. She is now undergoing treatment.

More than a million Ukrainians annually suffer physical and sexual aggression in the family. Such data of the Ukrainian Institute for social research. And 600 die each year from domestic violence. The Deputy Minister of justice told how to recognize domestic violence and how to deal with it. 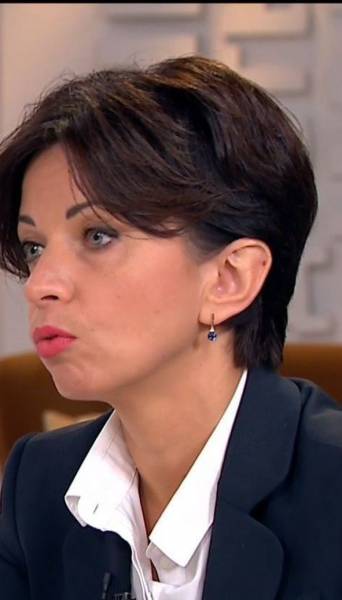