Militants continue to fire from tanks. The situation in the Donbass 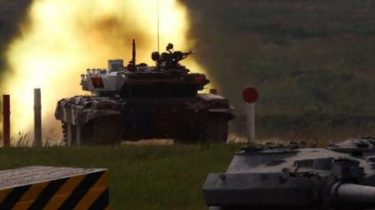 Militants continue to fire from tanks. The situation in the Donbass

For Tuesday, August 28, at the forefront in the Donbass , the militants have committed 32 attack of the Ukrainian positions, including with the use of forbidden heavy weapons.

In areas of the Trinity, Novoluganskogo, Novgorod, Novomikhaylovk, Chermalyk, Hnutove, Lebedinsky, Water fighters have carried out nine attacks on the positions of the combined forces of the Minsk agreements prohibited barreled artillery and mortars. Close to Lebedinsky fired on Ukrainian positions with tanks.

“With the escalation of the situation unit of the joint forces returned fire to suppress the enemy’s firepower. On the last day, August 28, the situation in the area of the surgery was tense, but remained fully controlled by the Combined forces,” – said the press center.

According to the Ukrainian intelligence, were destroyed three militants.

Last night, August 29 from midnight until seven in the morning, the militants twice shelled the positions of joint forces from heavy machine guns near Hnutove and Talakivka.

Remember, today at midnight in the occupied Donbas was supposed to start “school truce”, but this did not happen.