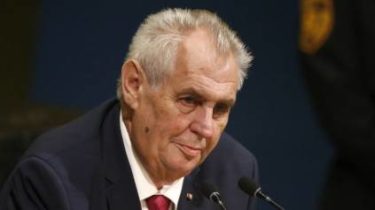 Zeman is going to discuss this issue at the European Council meeting.

Czech President Milos Zeman proposed to discuss the lifting of EU sanctions against Russia at a meeting of the European Council.

He stated this during a meeting with Czech diplomats, writes SeznamZpravy.

“These sanctions are not beneficial to anyone”, – he stressed.

“The new government in Italy opposes sanctions, and Austria after Putin’s visit, says about the same,” added the President, noting that the Czech Republic should actively work on this issue.

Note, the Czech President Milos Zeman called the annexation of Crimea by Russia “completed thing” and offered to compensate for “depressed” areas or financial gas.

We will remind, earlier the Minister of internal Affairs of Italy Matteo Salvini said he believes Crimea legally annexed by Russia, and the Revolution of Dignity in Ukraine called “fake” and “financed”. He also added that his party “League”, which has no connection with United Russia, allegedly did not receive any funds from Russia for the promotion of their political forces, and indeed that the European sanctions against Russia should be abolished.

Subsequently, the Minister of foreign Affairs of Italy, Enzo Moavero Milanesi said that Italy adheres to a common EU position and not recognize the annexation of Crimea, contrary to the scandalous statement of the head of the Italian interior Ministry.