Defused without a single shot. Police showed video of the detention of his father who took children hostage 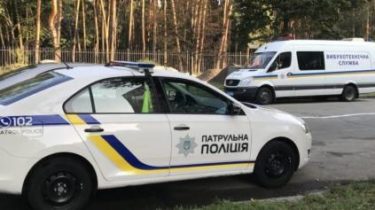 Defused without a single shot. Police showed video of the detention of his father who took children hostage

As it turned out, the man had served in the ATO.

Police have released video of the arrest in Kiev, armed men who took hostage their own four children.

The corresponding video appeared on the official website of the Department.

“At approximately 6:30 am received information to the call center of the police of Kiev about the fact that in the Svyatoshinsky area there was a conflict between husband and wife, in which he was beaten, kicked out of the apartment, and the apartment held by force of their four children. The man was aggressive, threatened to kill the children, members of the police,” – said the chief of the Department of national police of Kiev Andrey Krishchenko.

According to law enforcement officers, the man was wearing a bulletproof vest and a metal helmet, during the negotiations, he let the older girl.

“The horror started the night he started us all to Wake with a scream, cursing at my mother. She ran away, called the police. He began to whoop it up, to say something about the Soviet Union, began to include loud music, although we asked to turn it off. He began to shout that the living don’t give up, put on his military uniform, which he had left with the ATO. Probably have him beat in the head,” said the girl.

As noted in the police, then they are distracted by a man and when there was a 100% certainty that children will not suffer, the special unit began the assault and detention of the malefactor.

“According to operational information, found out where he stands, the door was slightly ajar. Together with the patrol, talking to him, found that he got distracted, and went in, disarm him without firing a shot. Released with the children, nobody suffered”, – said the employee of KORD capital state of the Channel.

During a search of the detainee was seized bladed weapons, as well as two units of firearms.

“Previously visually identified that is designed for shooting with rubber bullets, but the examination will provide final conclusions”, – added Krishchenko.

Now, investigators opened a criminal case under article “hostage-taking” in particular we are talking about the capture of children in hostages, the man threatens from 7 till 15 years of imprisonment.