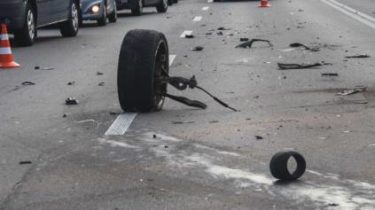 An accident on the Boulevard of Friendship of Peoples © Informer

The driver suffered one of the machines.

In Kyiv on Boulevard of Friendship of Peoples have one of the machines broke and fell off the wheel that caused an accident involving three cars.

The accident occurred near the Academy of financial management. VW moved towards the metro station “Lybidskaya.” On the road he fell off the wheel, so that the car flew into the oncoming lane and collided with two other cars.

See also:
In a large-scale accident in Rivne region faced four cars, there are victims

Photos from the large-scale accident in Kyiv on Boulevard of friendship of peoples: in an old tin Volkswagen on the go…

The driver of Volkswagen was hospitalized. Nobody else was injured. In the direction of the bridge Paton formed a large traffic jam due to an accident.

Recall that in Dnipropetrovsk region in the city pidhorodne VAZ brought down to death 15-year-old girl on a pedestrian crossing and disappeared.