“Another aggression on the part of Ukraine.” In “DNR” promised to avenge the murder Zakharchenko 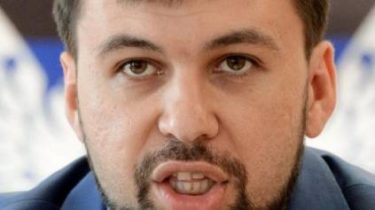 “Another aggression on the part of Ukraine.” In “DNR” promised to avenge the murder Zakharchenko

The rebels believe that their leader eliminated Ukraine

Undermining the leader “DNR” Alexander Zakharchenko was organized by the Ukrainian side.

This was stated by “the Chairman of National Council of DNR” Denis Pushilin.

“It is another aggression on the part of Ukraine. The head of the “Donetsk people’s Republic” were killed in the blast, which occurred at approximately 17:00. Donetsk will avenge this crime,” said the gunman.

See also:
“I went to a concert by Kobzon”: how social media reacted to the death of the leader of “DNR” Zakharchenko

We will remind, in the center of Donetsk on August 31 , a bomb exploded near a cafe “Separ”, the explosion had killed the leader of fighters “DNR” Alexander Zakharchenko and wounded “Minister DNR” Alexander Timofeev.

Subsequently, in “DNR” said that the detained “Ukrainian spies” on suspicion of the murder of Zakharchenko. The number of detainees was not reported.