Poroshenko discussed with Volker steps for the de-occupation of Donbass 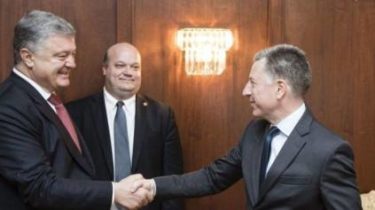 Poroshenko discussed with Volker steps for the de-occupation of Donbass

The meeting was held in the framework of a private visit of the Ukrainian President to the United States.

In Washington, President Petro Poroshenko held a meeting with US special envoy on Ukraine with Kurt Volker.

This was reported on the presidential website on Saturday, 1 September.

“The two sides discussed the security situation in the East of Ukraine and coordinate further steps for the de – occupation of Donbass”, – stated in the message.

Also Poroshenko thanked the U.S. for the continuation of the sanctions policy against Russia and noted the importance of increasing pressure on her for the immediate release of Ukrainian hostages.

“President Poroshenko and the US special envoy also exchanged views on strengthening defense capability of the Ukrainian army”, – said the press service of the President.

In addition, the sides discussed issues of strengthening cooperation between Ukraine and the United States to prevent Russia’s interference in Ukrainian elections.

Recall, Petro Poroshenko left for the States at the farewell ceremony with Senator John McCain, who died August 25. This is a private trip, the President flew by a regular flight.