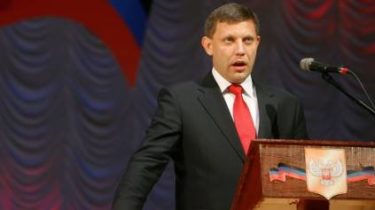 The leader of the militants died in an explosion in a cafe “Spar”.

The security service of Ukraine has confirmed to TSN the news that the head of the so-called “DNR” Alexander Zakharchenko was injured in the explosion.

“According to our information, the attack occurred, injuring Zakharchenko. We believe that internecine wars between the terrorists who can’t share power, money, and the rest”, – said the press Secretary of SBU Elena Gitlyanskaya.

See also:
Went to hell. Murder, assassination and loud dismissal of the leaders of the “DNR” and “LNR”

Note that the press-Secretary Alena Alekseeva Zakharchenko has officially confirmed that the leader of the militants was killed in the attack. And was allegedly detained “Ukrainian saboteurs” involved in the explosion.

As you know, the explosion occurred in Donetsk, near the cafe “Separable” – the explosives allegedly were laid out in parked cars. Zakharchenko seems to have died in hospital from his injuries.