Destroyed the fighter and enemy shelling. In OOS told how the “school fire” 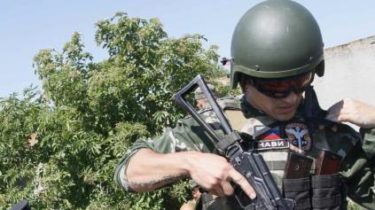 Destroyed the fighter and enemy shelling. In OOS told how the “school fire”

In the past days the situation in the area of operations of the combined forces was controlled, but the militants opened fire on positions of Ukrainian law enforcers.

See also:
The militants continue to shoot, however, the situation on the front line in the Donbas stabilized

Among Ukrainian defenders no casualties, during the day, one occupant killed and two wounded.

Fighters OOS adhere to the terms of the “school of the truce, and the Russian occupation troops are violating it, although somewhat reduced the intensity of the attacks.

As previously reported, in the occupied territory of Donetsk region declared a state of emergency and closed borders, particularly with the occupied districts of Luhansk region and Russia after the assassination of the leader “DNR” Alexander Zakharchenko.

In the center of Donetsk on August 31 occurred the explosion near the cafe “Separable”, in the explosion was killed, and Zakharchenko wounded “Minister of DNR” Alexander Timofeev.

Subsequently, in “DNR” said that the detained “Ukrainian saboteurs” on suspicion of the murder of wise. The number of detainees was not reported.

The representative of the Ministry of foreign Affairs of the Russian Federation Maria Zakharova said that the death of the leader of terrorists “DNR” Alexander Zakharchenko can be involved in Kiev. The security service of Ukraine believes that the internecine wars between the terrorists who can not divide power and money.

To perform the duties of leader of groups “DNR” after the murder Zakharchenko will be “Deputy Prime Minister Dmitry Trapeznikov. In 2001-2005 he was the Manager of the football club “Shakhtar”, was responsible for the development of the fan movement. Trapeznikova was called the “gray cardinal” of the group.