Card infected with the coronavirus of Kyiv as of may 4: Darnitskiy district breaks records

The leader in incidence among Metropolitan areas remained the caves.

In Kiev over the past day recorded 24 cases of infection with coronavirus, of which 5 – in Darnytskyi area.

This was stated by the mayor of the capital Vitali Klitschko during the online briefing.

“Recently, records on the number of patients has Darnitskiy district. There are already 256 patients. And he came in second place after the Pechersk district, where the sick 333 people”, – he said.

According to Klitschko, the reason is that in the Darnytsia district less abide by safety rules.

“Darnitskiy district is densely populated. A lot of people are in different places,” added the mayor.

Note that laboratory-confirmed cases per day: 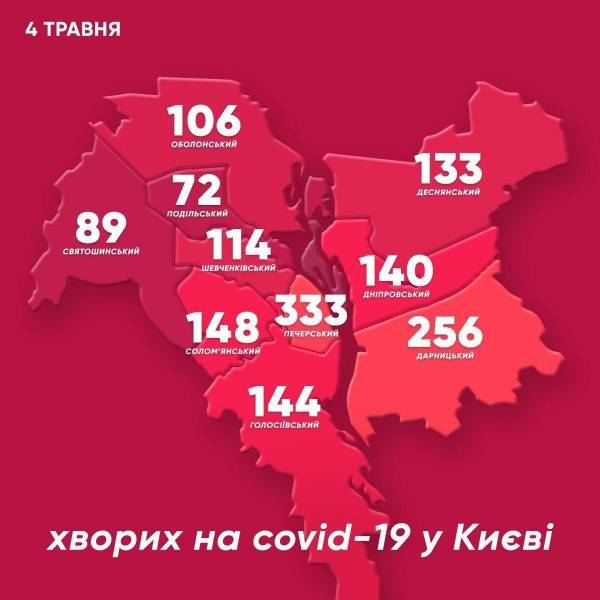 We will remind, on March 11 the Cabinet of Ministers of Ukraine in three weeks, has imposed a quarantine on the entire territory of Ukraine for combating coronavirus from China. The Cabinet proposed the establishment of restrictions on holding mass events, which planned the participation of more than 200 people. But this does not apply to measures of state necessity. Sporting events possible with the permission of international organizations, without an audience. Ukraine closes borders. The work of metro and road, railway and air connections between the cities and regions of 18 March in Ukraine will be temporarily limited. A number of regions have closed educational institutions and imposed a number of strict restrictions from the closure of food service establishments prior to the ban on exit and entry to the city.

2 weeks after that, the Cabinet declared a state of emergency on the entire territory of Ukraine and extended the quarantine for a month – until April 24. 3 APR quarantine strengthened: mandatory 14-day observation for those coming from abroad, forbidden to move through the streets more than two persons, except in cases of support of children. On 22 April, the quarantine was extended until may 11.

After that, about the discovery of the coronavirus began to be reported and in other areas. The epicentres of the outbreak in Ukraine have become Chernivtsi region and Kyiv city, where the disease is diagnosed the most. For the latest news on the spread of the coronavirus in Ukraine, the number of patients and deaths, as well as a means of combating COVID-19 on the website Dnia.