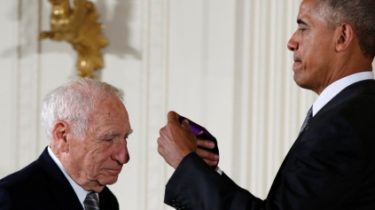 Mel Brooks decided to have some fun while getting medals from the President.

When the head of state awarded him a medal, he did look like he wants to pull down Obama’s pants. Present, and the President responded with a laugh. The actor applauded for a long time. About it reports ABC News.

The White house Brooks was awarded the National medal of arts and Humanities.

Pres. 2015 Obama awards the National Medal of Arts to Mel Brooks “for a lifetime of making the world laugh.” https://t.co/bGsVe1NLg6