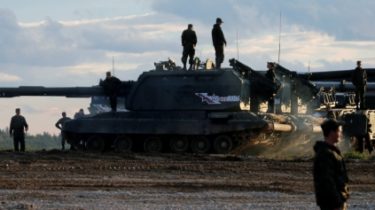 The separatists are 22 times broke the silence mode.

Militants of the terrorist organization “LNR” fired from Minsk agreements prohibited mortars 120-and 82-caliber positions of the ATO forces in the Crimean in the Luhansk region. Also the terrorists had used rocket launchers and small arms.

Also at the direction of Lugansk under fire from separatists turned out to the Village Lugansk, which should take place the breeding of the conflicting parties. The militants fired rocket-propelled grenades, anti-aircraft and small arms.

Read also: Militants refused to withdraw its troops from Peter and Stanytsia Luhanska

In addition, “Lnrovtsy” Novozvanovka fired from machine guns and small arms and Verkhnetoretskoye – from small arms.

It was restless, and on the Mariupol direction. In the area of Shirokino and Pavlopolya militants opened fire from grenade launchers, machine guns and small arms, and near Marinka – from small arms.

Read also: Kuchma warned of a possible collapse of the peace process with militants

At the Donetsk direction terrorists fired at VSU positions near Avdeevka from grenade launchers, machine guns and small arms, and in Novgorod and Water was shooting from small arms.

Only on Sunday, October 2, fighters 22 times violated the ceasefire in the ATO zone.

We will remind, near the Crimean in the Luhansk region on Sunday was killed by an officer of the 93rd mechanized brigade Miroslav Misla.