In the Donbas the troops bred: risks and dangers which can wait for Ukraine in the Village of Lugansk 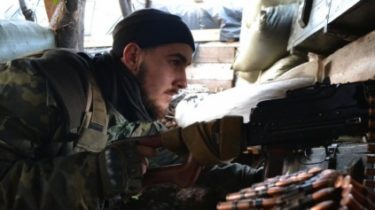 In the Donbas the troops bred: risks and dangers which can wait for Ukraine in the Village of Lugansk

Military promise not to leave the residential quarters of the Village.

This week in the Donbas started the delineation of the troops.

In Gold of the Luhansk region, the Ukrainians retreated to a kilometer. Supposedly so did the terrorists, because, according to the terms of the agreement, the withdrawal of the pilot sites for a new peace project was to begin after seven days of utter silence, says the story TSN.Week.

However, as reported by TSN correspondent Andrew Tsaplienko in the Village of Lugansk, a former hotbed of separatism, the Ukrainian military is begging not to leave their positions. Luganchanka Nataliya jurbenko knows what it’s like to be alone with the militants. The woman ran away from them from the occupied city. She gathered the people, led to the Chairman yeah, so he can understand what will happen if the Ukrainians take a step back from their land.

“I just read on these sites: “as soon As that happens, we go in. The village is ours, and all Pro-Ukrainian will hang, cut. So nothing good is waiting for us” – says Ekaterina Artemova, a resident of the Village of Lugansk.

It should be noted that the fate of the local people decided over hundreds of kilometers from the Village. With a new peace plan that was signed in Minsk, will occur the mutual withdrawal of armed formations in the Village of Lugansk, Gold and Petrovsky. The militants and the Ukrainian army should retreat from the front lines on the arm, and if the guns will be silent for seven days. If you will be quiet, the next four demilitarized zones will be in Trehizbinsky, Novotoshkovka, Artyomov and Novoselivka Druha. Around Happiness, Trehizbenka and Debaltsevo create a so-called security zone.

The line of demarcation is considered to be the Seversky Donets, but in the Village of Lugansk, there was a rather strange situation — the enemy has set up roadblocks on the two banks of the river. Therefore, if they withdraw, then obviously entrenched on the commanding heights. If the Ukrainians will move away, leave the village centre.

Strategic loss of Ukraine is obvious. In the event, behind the backs of civilians, militants can easily create on this side of the river your springboard.

To control the transition, in connection with another peace plan, the border guards remain unarmed. I must admit – the majority of people in the queue in the occupied territory to approve future demilitarization.

Another strategic loss, which Ukrainians need Minsk, is a railway bridge, which is a direct route to the rear of the Ukrainians. “Railway bridge is closed. If the Ukrainian military will depart from him, then the DRG will be coming here as children to school,” Yuri Zolkin, the Chairman of Stanichno-Lugansk district administration.

Ukraine risks for peace. And it is not known what causes the nerves of militants surrendered in the first evening of silence.

Alexander Kovalchuk, head of group civil-military cooperation THAT “Lugansk”, said: “Five of the attacks were within 20-30 minutes.”

Seven days of silence already considered. The thunder of gunfire seems to be heard in Kiev, not in Minsk, where the contract is signed. Leonid Kuchma, Ukrainian representative in the Tripartite contact group, promises 5, opponents will put the question bluntly: “We see that the party does not adhere to agreements. Probably with the sole purpose to disrupt generally the whole negotiation process. I do not think that these are small commanders. This is a serious political solution.”

But Moscow is trying to portray the matter as though does not influence the decision of the invaders, however, the document was signed by the Trilateral group, which includes Leonid Kuchma, the Russian side is representative of the Boris Gryzlov, the OSCE – Zaydik. Also signed by the leaders of the militants. The impression that fighters are independent party in the negotiations. In this format it is not difficult to predict the next stage: Moscow loses the status of a guarantor of peace and becomes a participant in the negotiations. Directly Ukraine is negotiating with the rebels, so the world recognizes the conflict is internal Ukrainian affair, which ends at Moscow.

On the date the military was convinced – of the residential areas of the Village they depart, and if the enemy break the word and move the Seversky Donets, the Ukrainians are preparing the force to regain their positions. According to the observations of Respondent TSN.Week Andrei Tsaplienko, Ukrainian troops are ready to do two more steps forward. Technically the Seversky Donets is not a serious obstacle, if indeed it is an order.