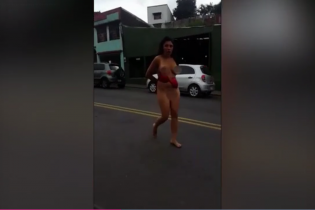 In the Republic of Costa Rica in broad daylight walked a naked woman. Reported by the Daily Star.

Hot brunette was walking down the street and undressed, throwing the oncoming cars in his clothes. The incident was videotaped by a passerby.

People, in turn, was surprised by the behavior of women. Especially when she began to pull wire in one of the oncoming trucks.

Read also: In Russia half-naked girl begging on the road to get married

It is noted that subsequently a woman has been arrested by the police. While the reasons for his actions are unknown.

Recall that in the UK in broad daylight, walked the streets Nude woman. Mysterious naked blonde photographed by stunned passer-by near the Church in Doncaster.