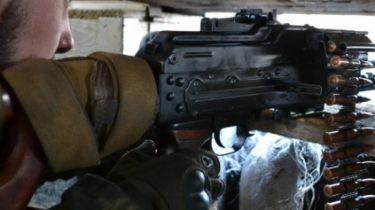 These provocative actions are evidence of the reluctance of Pro-Russian terrorist groups to adhere to the Minsk agreements.

Today, 3 October, fighters under the control of Russia 15 times violated the silence regime in Donbas.

About this on his page in Facebook press center of staff ATO.

“In Mariupol direction the enemy had violated the “silence regime” in the area Pavlopolya, Szerokiego, Starohnativka, and Bogdanovka, applying the small arms, and sirocina and Bohdanivka invaders shot from a grenade launcher. On the Donetsk direction the attacks by invaders from grenade launchers, machine guns and small arms recorded in the area Avdeevki”, – stated in the message.

The Ministry said that at the Lugansk direction the enemy resorted to armed provocations in the area of Novoaleksandrovka, Popasnaya, where militants used small arms.

“Today at about 16.00 in the village Petrovsky district, Donetsk region, during the withdrawal of forces and means of divisions in the framework of the Minsk agreements, terrorists carried out the cynical and provocative shelling of the Armed forces of Ukraine from a grenade launcher AGS-17 and small arms. At this time in the area of branch were representatives of the Special monitoring mission of the OSCE,” – said the headquarters of ATO.

In the press center said that the withdrawal of forces and equipment took place in accordance with the defined the course of the Minsk agreements procedures with the notification of the representatives of Special monitoring mission of the OSCE and the other side.

It should be noted that as a result of shelling none of the members of the Armed Forces of Ukraine have not suffered. The Ukrainian units were forced to suspend the withdrawal of forces and means.