Russian lawyer told somebody you can exchange the captured Sushchenko 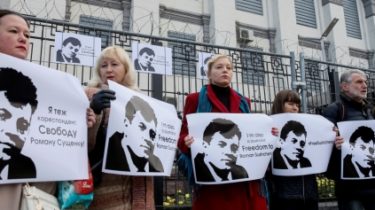 Russian lawyer told somebody you can exchange the captured Sushchenko

During the conclusion, the Ukrainians have already lost 6 pounds.

This was stated by Russian lawyer Nikolai Polozov on the air “112 Ukraine”, reports UKRINFORM.

“I believe that exchange is possible… For intelligence is not as important citizenship is, how much use and the need of a spy or agent. Therefore, in my opinion, this seized the SBU spy can be a material exchange Sushchenko,” he explained.

He also noted that Russia is almost always in a hurry with the rejection of the Consul for political prisoners. He recalled that his ex-client Nadezhda Savchenko at the time of the Ukrainian Consul was not allowed week.

Polozov said that today the journalist’s lawyer mark Feygin is in jail “Lefortovo”, where he plans to meet with his client “to get to the client in “Lefortovo” is a big problem. There are special techniques that differ from other jail. “Lefortovo” is not subject to the Moscow management of service of execution of punishment, and subordinated to the Federal service. They have established the rules that one can not understand”, – said Polozov.

Read also: In Moscow have lodged an official complaint to the Ukrainian journalist Sushchenko

He said that in this prison all the lawyers take the certificate and then decide whom to let and whom not to allow to the defendant.

“In Lefortovo holding a large number of people who are interested in the FSB, the so-called “status” of criminal cases, and, in my opinion, this is an artificial limitation on the right to visit a Consul or meeting with the lawyer. But the government does not want to influence it,” – said Polozov.

He also noted that the rights that are associated with the persecution of Ukrainian political prisoners in Russia or occupied Crimea, the court is not at all as an institution.

“There are people in robes who perform in advance of established order, therefore, in my opinion, if we’re talking about some legal prospects, we are disingenuous,” said Polozov.

In his opinion, the case Sushchenko should get the maximum media impact. “The only way to get international pressure on the Russian leadership, because the inside pressure makes no sense,” – said Polozov.

Meanwhile it became known details about the contents Sushchenko in prison. The Ukrainian said that in the first days of detention he was not fed and not given even water. During detention he has already lost 6 pounds.

Became known the details of the content of Sushchenko in prison: no food and no running water

The lawyer of the detainee in Moscow, Ukrainian journalist Roman Sushchenko today will visit his client in jail. About mark Feigin said TSN telephone. But the Ukrainian Consul Gennady brasileno, according to the defender, can get to the prisoner only this Friday. Now became known the details of the content of Sushchenko in prison. The Ukrainian said that on the first day of detention he was not fed and not given even water. During detention he has already lost 6 pounds.