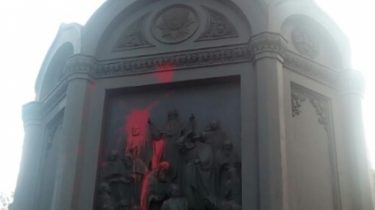 The monument will have to repaint

Red paint, which threw the oldest monument in Kiev on Monday, too deeply ingrained in a porous bronze, wash it will not succeed, says TSN.16.45.

Will have to repaint the entire monument. To such conclusion the capital’s public utilities. It will cost about a hundred thousand, take the money from the city budget.

Vandals police are looking for still. The case was opened under article “hooliganism”, the attacker faces up to 5 years imprisonment.

To begin the restoration of hope in city hall next week.

“This paint vandals pelted the monument, it is corrosive and ingrained as a part of the most sights. And it is impossible to remove. It spreads across the figure and we decided not to cause further damage, just paint,” says Director of the Kyiv center of monument protection.