Carpenter imagines himself “king of LC” and carries out all Stripping, the former ally of the leader of fighters 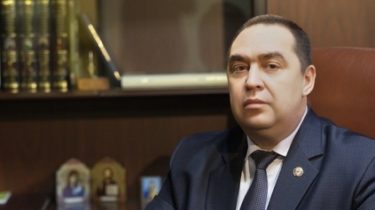 Carpenter imagines himself “king of LC” and carries out all Stripping, the former ally of the leader of fighters

The terrorist left the occupied Lugansk, because he feared for his life.

The so-called speaker of the Parliament “Luhansk people’s Republic” Alexey Karjakin has denied Russian media reports that he was detained by the FSB. According to him, he is in Moscow on business, reports Kommersant.

See also: the Prosecutor’s office announced in tracing the three organizers of the pseudo-referendum for the independence of “LNR”

He said that he flew to Rostov 1 October for the funeral of Gennady Cycalona, the so-called “ex-head of government LNR” and adviser to the leader of the militants Igor Carpenter. On 23 September he was accused of attempting “coup”, was arrested, and the next day was found hanged in the chamber

Carpenter also accused and Karjakin that he was trying to make a “coup” to the Luhansk eventually came under the control of Ukraine.

“Carpenter says things that can not prove. He imagines himself the king in this territory, and shall sweep all, who could compete with him. The official version is wrong. Tsepkalo was killed the personal guard of Carpentry. Don’t understand who even the prosecutors could come up with this formulation that he hanged himself out of fear for his life. About trying some kind of revolution or displacement Carpenter I don’t know. On elections of the head of the Republic, we with Gennady Typology supported him, the three of us was on all the posters. But then he first skillfully succeeded him as Prime Minister, making meaningless adviser, and then also removed me from the post of speaker of the Parliament LNR”, – commented on the situation in the leadership of the militants Karjakin.

See also: court told how long the trial against the leader of “LNR” Carpenter

He also said that “now in Lugansk clean of all who were related to the establishment of the Republic.”

“In a deplorable state Communist (“the Deputy head of the people’s militia LNR” – ed.) was the assumption that he was also killed, but the Prosecutor’s office released a video in which he is alive, but it is obvious that it is not all right,” he said.

Action alleges that traveled from the occupied Lugansk March 28 and since then never returned to the city.

“Tsepkalo I was suggested to go the night before the arrest, but he was sure that nothing will happen. In Lugansk, to be me it would now be unsafe, but all my thoughts are about returning to the territory of “LNR”. However, today the Prosecutor General is the de facto intelligence Agency of Ukraine in our territory. Most of the employees stayed with the Ukrainian times, and many even participated in anti-terrorist operation from the APU, and now work in the Prosecutor’s office LNR and smooth out those with arms defended the Republic. But I hope that the situation stabiliziruemost that will be able to agree and prove that everything that happens there now is not quite right,” he added.

Alexey Karjakin led the Parliament of the breakaway Republic. According to the edition “Mirror of week”, the FSB arrested the alleged leader of the terrorists two days ago in the Russian city of Rostov. And then Russian reporters said that he abdicated and the new Russia gave Ukraine. Security of our state that information deny it.

We will remind, Alexey Karjakin “dismissed” from his post as so-called speaker of the “National Council” in March of this year.

Edition of the Washington Post wrote in October that Wistocie Stripping led to a split among the leaders of rebels in Ukraine. Analysts say that this is the dark bloody drama can lead to increased confrontations on the front line and can be linked to disputes over control over lucrative smuggling between Russia and the government-controlled Ukraine who cross held by the militants territory. Probably, it reflects bureaucratic infighting among the Moscow patrons of the militants, while the Kremlin elite is waging their personal battles on war-torn fields of Donbass.