Meeting “Norman Quartet” and the agreement of the Russian Federation and Turkey. Five things you might oversleep 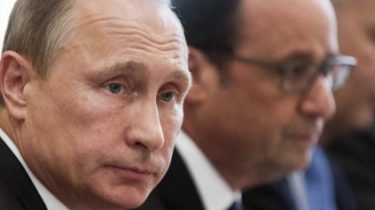 Meeting “Norman Quartet” and the agreement of the Russian Federation and Turkey. Five things you might oversleep

1. Ukraine has not agreed to participate in the meeting in “Norman format” with the participation of leaders of Ukraine, Russia, France and Germany. This was reported by a diplomatic source close to the negotiation process. The summit of the “Normandy Quartet” will not take place until the agreed “road map” that will provide for the implementation by Russia of the security conditions of the Minsk agreements. Read more→

2. The European Union has set a date of the summit Ukraine-EU, which is scheduled for November 24. In Brussels the President of the European Council, Donald Tusk, together with European Commission President Jean-Claude Juncker will accept the Ukrainian delegation headed by Poroshenko. Read more→

3. Russia has already a habitual line of conduct, placing of rocket complexes “Iskander-M” in the Kaliningrad region. This was stated by NATO Secretary General Jens Stoltenberg. “Now I see that they place the rocket “Iskander” near Kaliningrad. All this corresponds to the behaviour we have observed for a long time,” he said. Read more→

See also: In Sweden called the deployment of “Iskander” near Kaliningrad provocation

4. Russia’s leaders Vladimir Putin and Recep Tayyip Erdogan agreed to strengthen contacts in military and intelligence fields according to the results of the negotiations which took place in Istanbul. During the meeting, were agreed mechanism discounts gas prices to Turkey within the framework of the intergovernmental agreement on the construction of the gas pipeline “Turkish stream”. Read more→

5. Ukraine plans with minimal losses for the Ukrainians to withdraw from some agreements in the framework of the CIS, which are necessary to the Ukrainian state. This was stated by Director of the political Department of the Ministry of foreign Affairs of Ukraine Alexey Makeev. The current will be only those transactions that “will work in Ukraine.” Read more→