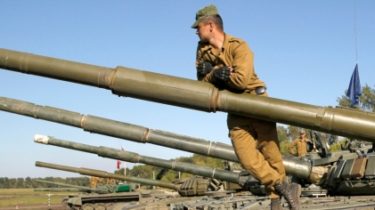 The enemy seeks to drain the Ukrainian military in the first place psychologically.

In Luhansk, an enemy reconnaissance group fit close to the positions of the Ukrainian army. In the village of Trekhizbenka of these attacks occur almost daily, according to a story TSN.19:30.

This is one of the outposts of the Ukrainian army on the Seversky Donets river, which is the conditional border between Ukraine and occupied part of it. To the terrorists there less than a kilometer. From there they make raids on the territory controlled by the military and leave behind stretch marks. Fighters really staring at his feet, before making a move. And though large artillery duels, like in 2014, there are no military do not lose vigilance, as reigns another war and sabotage. “Fog and night quietly to them. Come whenever you want” – says the soldier with the Callsign “Vlad”.

CreditBank is one of the outposts of the Ukrainian army on the Seversky Donets river, which is the conditional border between Ukraine and occupied part of it. To the terrorists less than a kilometer, but if you go this destroyed bridge – you can see the bunkers of the separatists. The soldiers of the Ukrainian army say that great art duels like in 2014 here, but here there is another war and sabotage.

The soldiers are saying that the terrorists regularly shelled the village, where there is no war. This is necessary in order to keep the local population in fear and to set against the army – like, if the soldiers leave, the attacks will stop. In addition, contrary to the Minsk agreements, the so-called “people’s police” close to the line of demarcation gave myself a range where test news Russian Voentorg. The men believe that bullets fired from a powerful artillery, the militants are trying to psychologically put pressure on the APU.

However, the defenders of Ukraine on the tricks of the enemy is not conducted. Soldiers from the intelligence service works well, so they are aware of the rotation and the real number of terrorists and equipment in front of himself. On the maneuvers of the enemy just don’t react and open fire only when fighters get too close.