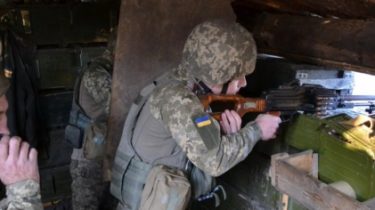 Of the three certain areas while abstraction took place only in Gold.

During a meeting of the Trilateral contact group in Minsk, has set a new date of allocation of forces and means in petrivs’ke and Stanytsia Luhanska.

As reported by press Secretary of the representative of Ukraine Leonid Kuchma Darka olifer, October 7, the withdrawal will occur in the Petrovsky and October 9 in the Village of Lugansk. At the same time it is emphasized that the diversion will only happen if the militants cease fire. Although the agreement was signed on September 21, however, attacks in these areas are ongoing. The village was last fired on October 4, and Peter – the third. The diversion took place just in one of the agreement points in Gold.

OSCE special representative Martin Sajdik told reporters that the agreement in respect of the seven breeding sites of power in Minsk failed to reach. The next round of negotiations scheduled for October 26. Among other things, will discuss the restoration of infrastructure in Donbass and the repayment of debts for the supply of water and electricity in the so-called “LNR”.

Recall, as explained by the people’s Deputy Irina Gerashchenko, the selection of these three sites was due to humanitarian necessity. And the representative of Ukraine in the Trilateral contact group on settling the situation in Donbas Yevhen Marchuk said that the weapons withdrawal at the three sites will not end. It is planned in October to negotiate about four sites and so on up to a full withdrawal if the necessary prerequisites.