Network users struck by a massive video of Ukrainian Marines 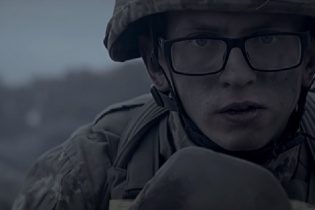 Network users struck by a massive video of Ukrainian Marines

“The ballad of infantry” urges Ukrainians to join the service contract.

In the network appeared the social roller “the Ballad of infantry” dedicated to the soldiers of the Land forces of Ukraine, which protect the country.

In this video, the emphasis is on the shoulder of the infantryman, on how she helps the soldier in all cases, during the service, from digging trenches during the battle to rowing during the river crossing. The whole movie is accompanied by spectacular battle scenes.

See photos: Ukrainian “winged infantry” showed how to conduct military training in the area of ATO

“It was one of the most complex scenarios of social video. Had to find a symbol for the army – simple, humane, devoid of feigned heroism and sharovarschiny. This symbol was the blade of the foot soldier,” – said the author of the project Alexander Smirnov.

Another project author Ignat Korobko added that the video shows real soldiers and officers of the Ukrainian army.

The video was created by order of the Land forces of Ukraine and urges Ukrainians to arrive on contract service.