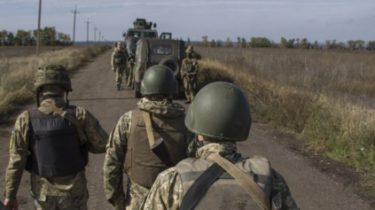 To monitor used UAV by the OSCE mission.

In the area of withdrawal in the Petrovsky district have been cleared of the area. However, near the Golden area remains mined.

See also: “do Not give speculative statements” Service denied the information about the failure of the breeding of the parties

This was announced by the speaker of the Ministry of defense of Ukraine on ATO Andrei Lysenko at a briefing in Kiev, transfers UNIAN.

“The status of the implementation of the Framework agreement for the breeding of forces and means adopted by the Trilateral contact group: gold – breeding has occurred, the terrain is not cleared, KPVV does not work because of opposition fighters; Peter – breeding has occurred, the area cleared of mines; the village of the Luhansk – breeding did not happen due to regular shelling by the enemy (the last episode occurred on October 6, just after midnight)”, – he said.

Lysenko added that for monitoring the implementation of the Framework agreement in the Gold and Petrovsky took the drone of the OSCE mission.

Another breeding forces in the Donbass has caused controversy and suspicion

After the Gold military and weapons this week simultaneously lit on one plot at Petrovsky. But in the Village of Lugansk, a third address, which agreed in Minsk, to withdraw Ukrainian troops can not yet. Said the Ministry of defence. Because attacks from militants still continue.

Recall, September 21, in Minsk it was signed the framework decision of the Trilateral contact group about the breeding of forces and means in the Donbass. The agreement concerned three areas – the Village Lugansk, Gold and Petrovsky.