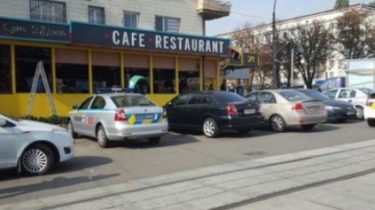 The perpetrator fled, the police are after him.

In the capital café on the Avenue of Victory after conflict between the two men shooting occurred. In it the victim was hospitalized with a gunshot wound to the groin and both hips, according to a story TSN.19:30.

The wounded man has already been operated on, the threat to his life seems to be no. Meanwhile, law enforcement officers collected evidence and interviewed witnesses of the incident. The cafe is located in busy location – near to public transport and shopping centre. During the shooting there were a lot of visitors.

In order to get all the shells, the investigators even had to break the floor summer terrace. Two witnesses were taken to the office for further investigative action, but in what status the law enforcement officers decided not to comment. The shooter fled, and police efforts aimed at its search.

In a cafe in the Victory Avenue after a verbal conflict between two men, one pulled a gun and fired several shots. The victim has a gunshot wound to the groin and both hips. He was hospitalized and operated. Police still do not know the weapon was combat or traumatic, its owner disappeared.