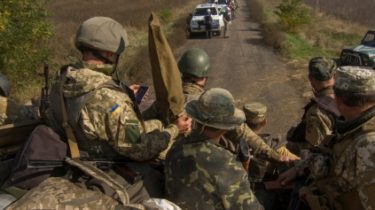 The enemy 38 times opened fire on positions of Ukrainian military.

Over the past day the militants are 38 times opened fire on positions of Ukrainian military. This is stated in the summary of the press center of staff ATO.

So, in Lugansk direction there were 15 violations “regime of silence”. In particular, from mortars, grenade launchers, machine guns and small arms were fired in the area of Novoaleksandrovka. In Novozvanivka strongholds of Ukrainian troops, the militants fired from mortars 120 caliber, and in the Crimean from automatic grenade launchers.

In addition, in the direction of Mariupol, there have been 17 attacks. So, in Maryinka the fire was fought from mortars 82 calibre, grenade launchers and armament of infantry fighting vehicles.

Also in the area of Granite and Pavlopol the enemy made attacks from small arms, in Shirokino — machine-guns of large caliber, in the area of Starohnativka — of BMP.

Recall that in the course of Friday, 7 October, Russian occupation troops and the separatists in the Donbass violated the regime of silence 11 times.