Ukraine has not agreed to participate in the meeting, “Norman Quartet” on 19 October – media 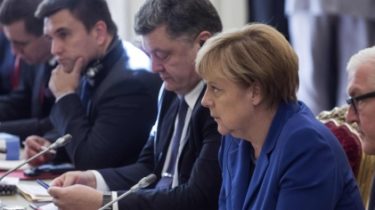 Ukraine has not agreed to participate in the meeting, “Norman Quartet” on 19 October – media

In Kiev insist on the implementation by Russia of the security environment of Minsk.

Ukraine has not agreed to participate in the meeting in the Normandy format with participation of leaders of Ukraine, Russia, France and Germany.

About it reports “Interfax-Ukraine” citing a source from a diplomatic source close to the negotiation process.

According to the interlocutor of the Agency, the summit of the “Normandy Quartet” will not take place until the agreed “road map” that will provide for the implementation by Russia of the security conditions of the Minsk agreements.

We will remind, the assistant to the President of Russia Vladimir Putin, Yuri Ushakov told RIA Novosti that the meeting “Norman Quartet” may take place on October 19. At the same time press Secretary of Russian President Dmitry Peskov was premature to talk about that meeting in the “Normandy format” will take place on this day.

France and Germany are working together to organize the meeting, “Norman Quartet” for peace in the Donbass. The President of France stated from the rostrum of the UN General Assembly. Speaking in new York, Hollande said, plans to meet with Poroshenko, Putin and Merkel in the coming weeks.