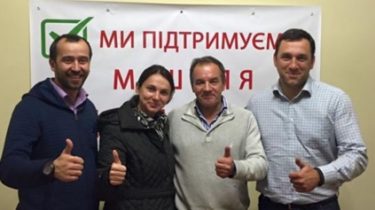 The wedding won’t be loud, and the pair talks about true love.

A descendant of the famous pre-revolutionary sort of 62-year-old Michelle Tereshchenko married. The mayor of Glukhov has chosen to marry former city Council honorable Helen Eskina, which is 24 years younger than him, according to a story TSN.19:30.

He affectionately calls “Cherish” and she him “Bear.” They fell in love a year and a half ago. The last year of living in two cities – Elena in the capital, and Michelle in Hlukhiv. See each other mostly on the weekends.

Bride Elena Eskina 24 years younger than her beloved. Michel Tereshchenko was born in Paris. In Ukraine, where he lived with his known descendants, for the first time as a tourist came 94 years. And 13 years ago moved to Glukhov forever. Here started his business and founded several companies.

Michel Tereshchenko was born in Paris. In Ukraine, where he lived with his known ancestors for the first time as a tourist came in 1994. And 13 years ago moved to Glukhov forever. Started my own business – several companies that are engaged in the processing of flax and hemp. And then headed the city – won the mayoral election in the fall of 2015. “I am a descendant of the very rich. But I’m not rich. Because the revolution was. I’m normal, as they say in France, the middle class,” he explained.

After the wedding, my husband plans to build a beautiful new home in Hlukhiv, and also take care of housing in Kiev. Children future marriage only dream of. Now caring for Vivien – yorkshirskiy Terrier. Elena has not yet decided whether to take her husband’s name. “We were not planning a loud wedding. We will have a dinner for close friends, and a wedding in the Vladimir Cathedral”, she said.

See also: Rival descendant of Tereshchenko on elections of the mayor of Glukhov confessed to “dark” the party’s past

At the wedding, in addition to Ukrainian friends, will be the mother of Michel, his son and daughter from his first marriage. After the ceremony the couple two weeks will go to the sea.