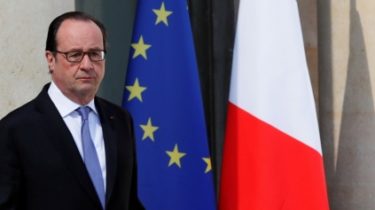 The Frenchman warns of the possibility of spillover of the war into a frozen conflict.

French President Francois Hollande warned about the possibility of”freezing” the conflict in the Donbass in case of failure of the agreements reached in Minsk. The corresponding statement he made at the parliamentary Assembly of the Council of Europe, says the story TSN.19:30.

Hollande said that more priority issue for local elections, not the return of Kyiv control over the Ukrainian-Russian border. Because the Minsk agreements if provided exactly this order: a cease-fire, disarmament, and then immediately – election. “Frankly, the progress is very slow. We must move forward on political issues, which will hold elections in Eastern Ukraine as soon as possible. As laid down in the Minsk agreement, in compliance with the Ukrainian laws and international standards”, – said the President of France.

Last month Hollande, during a meeting with Russian President Vladimir Putin called to discuss the “Normandy format” talks on the settlement of the conflict in the East of Ukraine.

Francois Hollande noted that this can happen if Minsk will not perform. He stated at the parliamentary Assembly of the Council of Europe. Noting that he considers a priority issue for local elections, not the return of Kyiv control over the Ukrainian-Russian border.