In Pidhirtsi local already the third day of the block polygon: I do not want to miss Kiev the trash 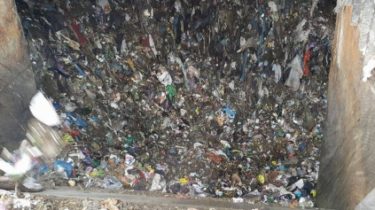 In Pidhirtsi local already the third day of the block polygon: I do not want to miss Kiev the trash

Authorities say they are going to reclaim the landfill.

In the village of Pidhirtsi already the third day of locked, a local landfill, where dumped 30% of garbage from the capital. Kiev authorities agree on the conditions for further exploitation of the territory.

This was stated by Deputy Chairman of the Kyiv city state administration Petr Panteleyev, reports UNIAN.

Read also: Villagers in the Lviv region have not agreed to a landfill in exchange for school and road repairs

The promotion is valid from 10 Oct.

“Conditions none no. They just say that all the trash in here under any circumstances can not take”, – said the representative of the KSCA.

“The plan with specific dates, what we do, how we do it. Most people arranged it. But there are radical people, in our view, they have other motivation. We will continue communication with them. Because the landfill No. 5 today for the city very important,” – said Panteleyev.

“We are well aware that the landfill be closed in two minutes it is impossible. Because the landfill is the construction dangerous, which must always accompany” – said Panteleyev.

By the end of this year the authorities are going to make peresypky cover 9 hectares of the polygon that form the stench. Until April 1, 2017 will be made by overlapping the entire map polygon.

“But only if the blocking polygon, these activities cannot be performed. We now explain this to people. We need to agree together and to move towards a productive goal – the closure of the landfill, its reclamation,” – commented the Deputy head of the KSCA.

Panteleyev said that these days the capital of garbage in other places, as well as incineration plant “Energy”, which launched with 100% load.

We will remind, problems with the garbage disposal has lions. Because of the fire on Gribovichi landfill the city does not have places where you can take out a large part of the trash.

As it turned out, the day before unknown persons have unloaded several containers of garbage on the landfill of waste close to Reshetylivka. What rubbish from the city, it turned out, when they found receipts from local stores.

In early October, residents of the city Pogrebische of Vinnytsia region blocked six trucks with debris. In addition, almost fifty people were on duty near a city dump. The residents were not going to release cars until you remove the debris that is already poured.

In turn, the Poltava region also mobilized to protect from Lviv garbage. Officials at the district level are planning to organize a night watch to prevent unloading trucks with debris.