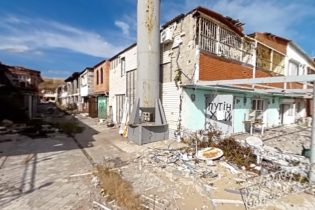 Destroyed buildings of the village are empty.

German newspaper Bild has published a video destroyed by the attacks of fighters near the settlement of Shirokino in the Donbas.

The footage taken by journalists, shows destroyed buildings and deserted streets. The once cozy houses near the sea has turned into a solid ruins.

The video hit two Ukrainian military. Civilian in the village at all. On the door of one of the houses visible obscene words in the address of Russian President Vladimir Putin.

As previously reported, as a result of night shelling in the occupied Donbas one fighter ATO was severely wounded, and three lungs. According to TSN, all four of the guys a few hours ago was operated on the doctors Avdiivka hospital and sent to the hospital.