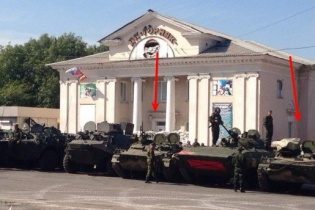 Technique observed in the video of Perevalsk.

In the zone of the antiterrorist operation in the Donbass found the use of an armored tractor MT-LB VMK, which is on arms of the 34th Separate motorized rifle brigade of the Russian Federation.

Similar to the MT-LB was destroyed by Ukrainian armed forces in the area of the checkpoint Marinovka Donetsk region in August 2014, according to volunteers of the international intelligence community InformNapalm. It is noted that for the first time on tractor MT-LB VMK they noticed when looked at the video from the square near the city Council Perevalsk in Luhansk region. He was posted to the Voronezh city information portal “36on”.

In the video, the journalists have shown in the picture of MT-LB mounted with a heavy machine gun “KORD” instead of the standard installation TKB-01-1. It is noted that such modifications are MT-LB release since the mid-90s in the Russian company “muromteplovoz”. However, in Ukraine they have never exported, even though they were armed militants of the Luhansk region.

In turn, during the investigation, the volunteers drew attention to the fact that the periscope to the tractor is available out of the box. Instead of the right side stand it is placed on the roof of the car, and in the case of equipment caused non-standard camouflage colors.

Read also: Russian military in the Donbas during the exercise drowned three BMP

To determine the exact modification of the tractor, the volunteers looked at the photo albums of the employees of the mountain brigades (8-th, 33-rd and 34-th and 200-th the Arctic motorized rifle brigade of the Russian army, who are armed with this type of technology and participated in the fighting in the Donbass. As a result, they have found that these MT-LB are in service with the 34th Separate motorized rifle brigade of the Russian Federation.

In the process of writing the outcome of the investigation, the Network found a photo which confirms the presence of at least two MT-LB VMK in September 2014 in the town of Perevalsk.

It is noted that to identify the exact modification of the MT-LB is not successful, however, the volunteers called it a MT-LB VMK.

We will remind, earlier the President of Ukraine Petro Poroshenko called the number of Russian weapons in the occupied Donbas. There are more than 700 Russian tanks, 1250 artillery systems, more than a thousand Armored vehicles and 300 multiple rocket launchers.