The foreign Ministry denied a report of aide to Putin on the meeting, “Norman Quartet” 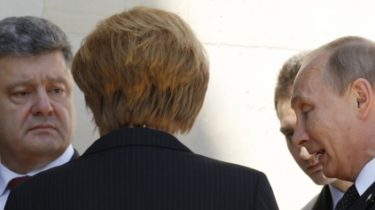 The foreign Ministry denied a report of aide to Putin on the meeting, “Norman Quartet”

No specific dates yet.

Arrangements for the holding of the meeting of heads of state “Norman Quartet” yet. This was stated by Minister of foreign Affairs of Ukraine Pavlo Klimkin.

“Today there is no agreement, I repeat, no agreement on the summit in the Normandy format,” – said Klimkin, UNIAN reports.

The Minister says, for organizing this meeting needs to be certain conditions, and should be a signal that the talks will be productive.

“It all depends not on the time frame. It all depends on whether we agree about the real results of such a meeting. If we have no real results, and real result for us because Russia is trying to distort all logic of Minsk, to negotiate a “road map”, in which are erected three key areas,” – said the Minister.

The first fundamental priority is safety, the second is the logic of the steps that are needed from a policy perspective. And the third – the release of hostages and political prisoners. Without this road map, the Minister said, the meeting makes no sense.

On the eve of the initiative to meet the four heads of state were made by German Chancellor Angela Merkel. And French President Francois Hollande are going to arrange a telephone conversation with Putin and Merkel to negotiate.