Trolling master Domino Kiva and meeting journalists from Russia with a song about Putin. Trends Network 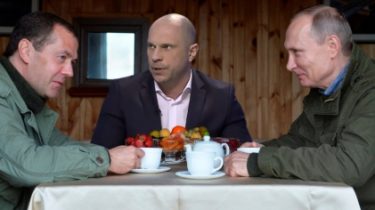 Trolling master Domino Kiva and meeting journalists from Russia with a song about Putin. Trends Network

Today, 12 October, Internet users laughed at the former chief of Department of counteraction of narcocrime of national police Ilya Kiva, who in an interview said that he had become the head of the Federation of dominos to fall into Putin’s entourage.

Also watched the video with the residents of Vilnius, which in the local pub we met the Russian journalists obscene song about Russian President Vladimir Putin and Ukrainian songs listened to in the “design” of the candidates in the presidents of the United States Donald trump and Hillary Clinton.